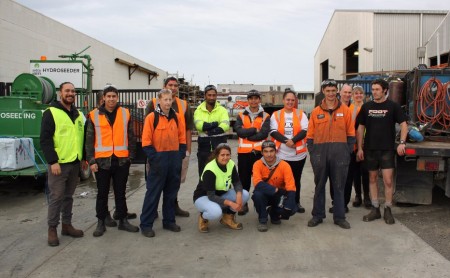 Competenz delivered an introduction to engineering pre-trades students at the Eastern Institute of Technology studying through the Maori and Pasifika Trades Training scheme. The MPTT is a government sponsored initiative designed to encourage more Maori and Pasifika participation in trades training. In 2016, the Institute through their MPTT Consortia (named Te Ara o Takitimu), invited Competenz and other ITOs to establish a forum to support their MPTT outcomes. Led by Competenz Pasifika Careers Advisor, Iani Nemani has stepped up to the plate this year and began the process given supporting a smooth transition from pre-trades to employment and training. In total, nine of the twelve enrolled students participated in the activity of which two were women and seven men. The students were supported by Lee Kershaw and Clare Hodson from Te Ara o Takitimu. Both Lee and Clare are great pillars of support of this initiative.

Competenz Account Manager Matt Durham was a real winner with the students; they were engaged and inspired by his positive and encouraging words. In fact, they were so excited they requested a follow-up visit this year. Matt’s presence proves that ITOs have positive relationships with employers, and this showed through when the students received a guided tour of Foot Engineering by owner/operator,  Dan Tong.

One of the students, Deejay Bryan, said “I’m glad that Competenz is onboard. This is going to be beneficial to the next batch of EIT learners, a lot of people like us need something like this.”

At the end of the tour, 2016 MPTT student and Competenz apprentice, Paul Taurima gave a short but very encouraging speech to motivate the students. Everyone came away from it with a big smile and buzzing from excitement to hear again from the team at Competenz.