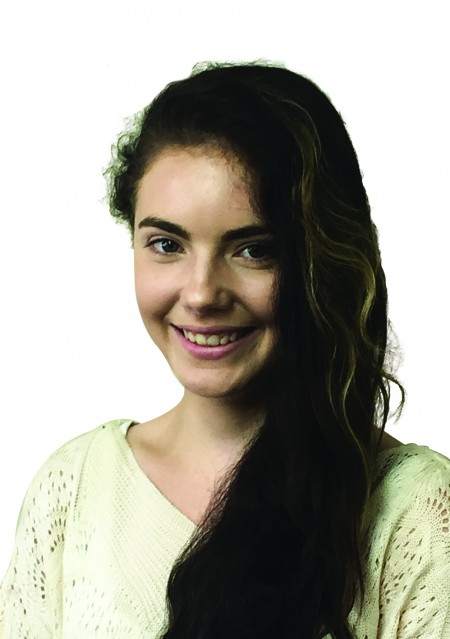 Hearing her name read out during the online Pride In Print Awards evening on June 25 alongside family, friends and her work colleagues was a “surreal” experience, says Ms Hooton.

“All of us were in the back room watching it and I was shaking – it was insane, there were multiple tears and yelling,” says Ms Hooton.

“First and foremost, I thank Dale and Sheryl Ertel for giving me the opportunity. I was a 16-year-old coming out of school and they saw some potential in me and hired me, and I’ve never looked back since then. It was a huge chance they took and I’m really grateful for that.

“I’m also really thankful for my high school Gateway teacher, I didn’t know what I wanted to do and she pushed me in that direction, and Competenz manager Grant Alsop, he was always very supportive and happy to answer any of my questions.

“Also, the staff that I’ve worked with over the years – you bounce ideas off each other and grow with each other.”

Ms Hooton, who was also named PrintNZ Digital Apprentice of the Year, says she has found the entire apprenticeship experience rewarding.

“I gave my family a bit of a tour of the factory and caught myself babbling away about processes and stuff and it’s when you do that you stop and think ‘wow, I’ve actually learned so much more than I realise’. That is such a cool thing and a cool thing to be a part of.”

Ms Hooton says she very much enjoys working within the small Matamata-based business.

“My favourite aspect probably being seeing the whole process come to life and having a happy customer. We had one the other day – she shook my hand and she was absolutely stoked with what we gave her.”

Looking forward to continuing to advance within the firm and further broadening her horizons, Ms Hooton says she is keen to soon commence the Diploma in Print Management.

His firm’s fourth Apprentice of the Year finalist and second winner, Mr Ertel describes Ms Hooton as an “absolute delight”.

“She is a wonderful kid,” says Ms Ertel.

“We were in the tea room and we all roared at the same time. It was a real treat to have her family with us – when you see parents with their eyes glistening with pride, that really is pretty cool.”

A former sheetfed apprentice himself, Mr Ertel says he strives to follow the example of his own first trainer who sought to “train you to be better than I am”.

“It is easy to teach kids if they are willing to learn. Maybe I can spot potential or I see a passion maybe that we can work with and bring the best out of them.

“I get as much of a thrill out of seeing these people change, grow and all sorts of things. It is great to see them mature.”

“I said to her that she set a standard that the others have tried to match.”

Maintaining a strong passion for the industry and training, Mr Ertel says he has “total admiration” for the role PrintNZ plays in acknowledging those in training – “they do it tremendously”.

Other Apprentice of the Year finalists were: