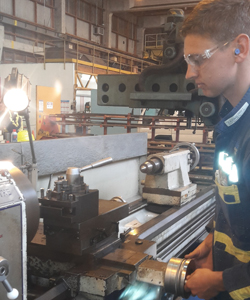 Juggling an apprenticeship and hockey training – to try to make the Black Sticks – isn’t always easy, but 22 year old Chad Whitehead is “pretty happy” with the choice he’s made.

As a kid Chad was always hands-on, so when his older brother, Jesse Whitehead, took up an apprenticeship at New Zealand Steel, Chad saw this was an opportunity.

But he had to prove himself first. So after finishing school, Chad completed four weeks work experience at the Steel Mill in Waiuku and had to pass a pre-trade qualification before being offered his apprenticeship at New Zealand Steel under the management of Apprentice Training New Zealand (ATNZ).

Now in his fourth and final year of the National Certificate in Mechanical Engineering – General Engineering, Chad says he loves the variety of work at his job.

“I can be machining new parts, repairing gear boxes or making repairs to hot metal rollers. There’s so much different equipment and so many machines to work with,” says Chad. “I also like that with an apprenticeship I’ve been able to pay my own way for everything – I don’t have to rely on my parents!”

Outside of work, Chad’s time is devoted to making the Black Sticks team, with training twice a week and games twice a week – all based in Hamilton – an hour’s drive away for the Waiuku local.

Chad’s already been asked to play in a couple of Invitational games against Canada – taking him one step closer to his ultimate goal. And with only a few months left of his apprenticeship, Chad’s other goal – to become a fully qualified engineer – will soon be achieved.