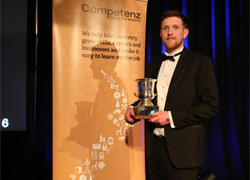 Third time’s a charm for 25-year-old Ben Henry, who became Apprentice of the Year at the national final of the Competenz and Retail Meat New Zealand competition in September. Ben has been amazed at the way the competition trail has helped him grow in skill and confidence, and believes the experience had quantifiable benefits for both him and his employer.

Ben entered the competition every year of his three-year apprenticeship in the butchery department of Centre City New World in Dunedin. With the active support of his line manager, Paul Mason and store manager Craig Nieper, Ben was thrilled to walk away with the regional title on his very first try.

“I went with three others, mainly because we saw it as a good way to learn and improve our skills.” The next step was the Nationals, “but that was a whole new environment!” said Ben. “I was happy with what I did, but I can tell you it was a very steep learning curve.”

In 2015 Ben won the regionals for the second time, and then came runner-up in the national competition. 2016 saw him take the road right to the top, impressing the judges and invited guests alike with his butchery skills and signature gourmet products, to win the Apprentice of the Year title this year.

And it’s not just about the cuts. As well as displaying his skills in the compulsory section, Ben had to outperform his competitors in an interview to evaluate his interpersonal, customer service and interpersonal skills, as well as taking a 45-minute industry knowledge exam, on everything from breeds of animal, post order services to cooking tips, to show he had a broad understanding of everything that’s important to the trade.

“I learn so much doing the competitions. I’ve taken away something from each one, whether it’s a way to improve my own skills, or picking up new ideas for products. Just watching other people is fascinating. It’s great figuring out what they’re doing, and comparing it to how I do it.”

Ben will always be thankful for Paul Mason’s support in setting up his apprenticeship and helping him find the career he loves. Originally from Mosgiel in Dunedin, Ben wasn’t sure what he wanted to do after high school, and went to Otago University to study physics and chemistry. But as he neared the end of his fourth year, Ben finally figured out that it wasn’t for him. Luckily, he’d been working part-time at Centre City as a butcher’s assistant while he studied, and after a lot of soul-searching, he talked to Paul about doing an apprenticeship.

Foodstuffs Group (New World’s parent company) invests in apprentices through Competenz in several retail grocery areas, and Ben took full advantage of the onsite assessments, the annual block course with Skills for Work in Christchurch and having Paul as his in-work assessor. He finished Level 4 in June this year, and is now gourmet supervisor under Paul.

Ben is keen to continue at Centre City, but he hasn’t finished with the competitions. With two Australian events under his belt (the NW Western Australian Young Butcher’s Picnic in Perth, and the World Butcher’s Challenge on the Gold Coast – where the NZ team ‘narrowly’ lost to the French team), Ben is also keen to go up against the ‘big guys’ in the Alto Young Butcher of the Year.

The support Ben gets from his team has helped him become the award-winning butcher he is today. “Paul pushed me, and I couldn’t have done it without him and Craig. I needed to do practise runs for the comps, and Craig takes on the cost. I also get so much support from Tony Watts and rest of the Centre City team. I have to take time out and they pick up the slack when I go off to compete.

”While he’s happy to expand his current role with New World at the moment, Ben can see himself managing his own shop or department one day. He’d like to head up his own team, and build an environment similar to the one he’s working in. Following on from his apprenticeship, Ben is now in the process of signing up for an introduction to business management certificate.

“Becoming Competenz Apprentice of the Year means a huge amount to me. It tells me I’m good at what I do, and it gives me the confidence to pass on my knowledge to customers and fellow staff members. I like to know that I can give good advice and pass on my skills to help other people. It also reinforces the fact that Centre City and the Foodstuffs system are doing a great job of training people.”

If you see Ben in Centre City New World, be sure to ask after his competition-beating beefy garlic bread and rib eye sushi!