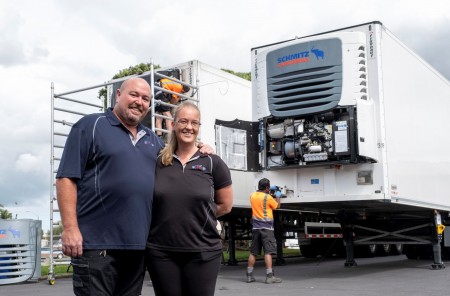 From being one of New Zealand’s first female refrigeration and air conditioning apprentices, Marie Doran now owns her own refrigeration company with husband Terry and has an apprentice of her own about to qualify.

Marie chose refrigeration and air conditioning as a career because she loves “all things mechanical”.

“Refrigeration was different to being a car mechanic because it involves electrical, refrigeration and plumbing and with transport refrigeration you also learn diesel mechanics as some of the systems run on their own diesel powered engines,” she says.

Despite COVID, TRS’s services are in high demand and will continue to increase coming into the summer season. Currently the Dorans have one apprentice, Alan Hart, who is about to complete his qualification with industry training organisation Competenz. Within the next month, Hart will have completed a level four qualification in refrigeration and air conditioning. TRS is now in the process of signing up their next apprentice, Joel Chandra, who is looking to follow in Alan’s footsteps.

“Having an apprentice benefits our business because they get to know the industry really well while they train, which makes them more productive in the field after earning their trade certificate. It is very difficult to find good trained refrigeration mechanics who know the complete truck trailer industry so training them with Competenz is invaluable,” says Marie.

“In addition, there are wage subsidies available for employers of first and second year apprentices. This support means that employers don’t have to compromise when it comes to training and retraining employees." he says.

"There’s never been a better time to take on an apprentice.”

Marie says Alan and Competenz have really helped TRS, setting them up as an employer to take on apprentices and helping the apprentice along the way. “We would like to see more employees complete the apprenticeship through our company as we grow.”