From apprentice to business owner 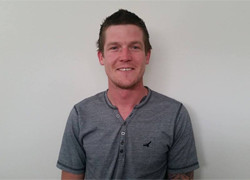 “My apprenticeship took me way beyond learning how to do the basic ‘pipework’ in this job. But running your own team of guys, running the whole show? That’s completely different from doing it yourself.”

Aucklander Hayden Watt finished his apprenticeship in mid-2016, and now John Stevenson, his Competenz account manager, is helping him upskill to run his own business.

“I’d say I went beyond Level 4 in terms of skills and experience in the seven years I worked with Fire Security Services, but now I have the paper qualification to back me up when I say I can do what I do,” says Hayden.

“I know I can get a job anywhere based on my experience, but I don’t want to rely on someone giving me a verbal recommendation. Now I have a paper trail, and I know office people like qualifications!”

Getting qualifications in the Fire Protection industry has only recently gained momentum, as many areas are growing and developing in line with technology and changing demands. Some business areas are brand new. Hayden entered the industry almost by accident.

“University wasn’t an option; I knew books weren’t for me. I wanted a hands-on job. It’s what I like to do.”

He started out working in a factory when a friend’s dad from the industry told him about a job installing sprinkler pipes. He started his apprenticeship 18 months later when he moved to Argus Fire Protection.

“Back then it was a correspondence course. It hadn’t really turned into the kind of qualification you get for plumbing or building yet. It was more about onsite experience. I did it for 18 months, but I had to do it in my own time and sometimes I wasn’t all that motivated.”

Hayden says that’s one of the reasons he made the move to Fire Security Services. The company designated Wednesday afternoons for training, and Hayden was in a group of 10 apprentices. John came in once a fortnight and “pushed me to finish the course.” The company’s managers all took a turn supporting the weekly training, and there was an incentive scheme in place. Trainees paid for the sessions out of their wages each week, but if they finished the course they were reimbursed.

Hayden agrees that his apprenticeship not only helped him to progress on to more varied and complicated roles, but it paved the way to setting up in business on his own.

“If you want to, you can learn everything to do the basic, practical job from the people around you. But the fire tech unit standards help you understand all the compliance; how the industry works. You learn report writing, and about the different relationships between companies and industries.”

Now 28-years-old, Hayden worked his way up from a range hand (who helps a trained fitter), then pipe fitter, then charge hand, and finally working supervisor. He chose unit standards from the National Certificate in Fixed Fire Protection that suited his specialism as a sprinkler fitter.

“As a supervisor I got to run a crew of guys, which meant I was half on the tools and half off doing the paperwork. I know that’s not the same as being the boss, but its half way there.”

Hayden recognises that dealing with invoices, customers and running a crew for someone else is good practise, and that there’s a lot more he needs to know and understand. But the next step was breaking away and starting up on his own business.

Hayden is aware that there’s still a serious shortage of qualified labour in the Fire Protection industry, and he wants to do something positive to solve the issue.

“My plan is to pick short-term projects, ones I can train people on. Train them and get them paper qualified. Me and John, we’re going to build an army!”

Because he’s watched the Competenz model for Fire Protection expand and develop over the years, Hayden is sure it’s the way to go in the future. Talking things over with John, Hayden can see a way to help the course develop and create a career path that helps both new apprentices and his own business.

“Not everyone has heard about sprinklers, and wouldn’t think of it as a career. But if someone works and trains with me, five years later they could be running a couple of guys, or move over to office work or management. Or they can stay on the tools and get paid well.”

Qualified, business-ready and planning ahead, Hayden Watt is an emerging force to be reckoned with in the Fire Protection industry.