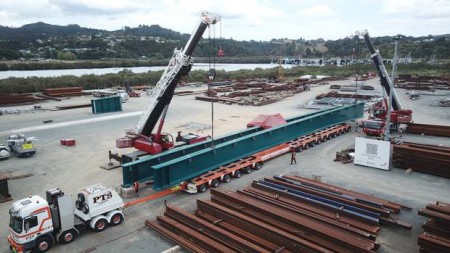 Travelling over the Brynderwyns south of Whangārei can be slow at the best of times - but imagine taking more than an hour to get down the southern side of the hill?

Well, if you are a 52 metre-long, 100 tonne piece of steel fabricated for a major Auckland bridge project, then that's just how long it has to take.

This week Whangārei firm Culham Engineering has started sending 10 massive beams - possibly the largest ever fabricated in New Zealand - it has made for the Panmure/Ellerslie bridge project in Auckland.

Culham Engineering managing director Rob Kirwan said the first of the beams left on Wednesday night for the trip to Auckland aboard a huge trailer.

''It spent the first night at Windy Ridge (north of Auckland) then was delivered to the site this (Friday) morning. It took about an hour to get down the south side of the Brynderwyns,'' he said.

''It was a bit of a tight squeeze in places but it all went really well. I don't think we'll be able to get anything bigger over the Brynderwyns, that's about the limit.''

Kirwan said this was the largest fabrication work the company had done and may be the largest ever in the country, and Culhams was chosen due to its experience in large steel fabrication jobs.

He said 20 to 25 people worked on the project at one time. The project was worth "north" of several million dollars - and it was great experience for them, particularly the apprentices.

''It gave the apprentices a chance to work on fabrication that they wouldn't normally get the opportunity to do. They were working with heavy steel that's 100mm thick in places and they did a great job.''

Kirwan said Culhams hoped to get some of the work planned from the $800 million-plus announced for Northland by the Government on Wednesday as part of its $12B infrastructure spend-up.