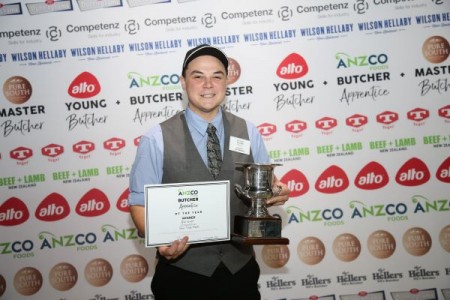 Six apprentices went head-to-head on 10 November in an impressive battle of the butchers that saw knives flashing, bandsaws humming and mincers grinding.

Competenz apprentice, Blair Wright from Peter Timbs Meats in Christchurch, took out the title of ANZCO Foods Butcher Apprentice of the year.

Finalists were chosen in September following five tightly fought regional competitions and the grand final was streamed live to the industry from the ASB Showgrounds in Auckland.

The two-hour cutting test required competitors to keep their nerve and showcase their expertise in front of a team of eight judges.

The ANZCO Foods Butcher Apprentices were tasked with breaking down a size 20 chicken, a whole pork leg, a beef short loin, one mystery cut, and a lamb forequarter into a display of value-added products. In addition to this, they were expected to complete a 30 question, multiple choice exam and an interview with the judges.

A difficult challenge for any young apprentice, Blair, who was the youngest competitor in the final, having only just turned 19, was game to prove his skill and passion.

"It’s awesome I’ve won, I’m totally blown away,” he says. “I’ve put in hours of practice. Repetition was key to get everything perfect."

The ANZCO Foods Butcher Apprentice category provides an invaluable opportunity for those just starting out in the industry. Blair Wright is a prime example of what can be achieved through industry training programs, hard work, and dedication to his craft.

Other winners on the day included Jayden Segar from Countdown Central Auckland, who was awarded the title of Competenz Emerging Talent; James Smith from Pak’n’Save, Pukekohe who won the prestigious Alto Young Butcher of the Year title; and Rob Lees from Warkworth Butchery took out the Pure South Master Butcher title.

Find out more about taking on a butchery apprentice.

If you want to learn on the job like Blair, there are a number of great opportunities waiting for you – find out more here.