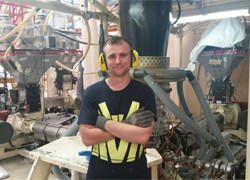 For Niall Presland-White, working in the plastics industry was ‘being in the right place, at the right time.’ Niall is a NZA apprentice doing the National Certificate in Plastics Processing Technology Level 3 and Level 4 at RSS Plastics based in Warkworth. The 27-year-old started in the industry through an opportunity from a friend.

“I started at RSS Plastics in 2008 when I was 18-years-old. A friend of mine offered me a job. He was the owner of RSS before Convex Innovative Packaging took over in 2010,” Niall says.

“The year Convex came on board, they saw potential in me and put me into the National Certificate in Plastics Processing Technology Level 2 course. The course was confirmation for me on the skills I had learned over the years. A few months after completing this course I started my apprenticeship.”

Taking on a management role at RSS was a natural progression for Niall.

“I officially started as the Extrusion Manager at the end of last year, although the management team have been grooming me for this role months before. I manage tasks such as supervising shifts, organising resources, communicating with customers, and day-to-day maintenance of the factory.”

The team at RSS and Convex have been supportive every step of the way.

“I can call on anyone in the team if I have any questions. They want me to achieve, and they encourage me to strive to do my best.”

“Niall is an integral part of the management team. His work is always done ahead of time. He’s a natural leader, and is a people person,” Aaron says.

Niall wants to continue to build upon his skills after completing his apprenticeship.

“I’d like to move onto doing the National Certificate in Plastics Materials Level 5, or possibly doing a management course to learn more about the management side of the business. There are a lot of career opportunities having management experience,” Niall says.

Niall’s advice to anyone wanting to do an apprenticeship?

“It’s a benefit having experience under your belt before going into an apprenticeship. Surround yourself with good people who are knowledgeable and enthusiastic about the industry.”