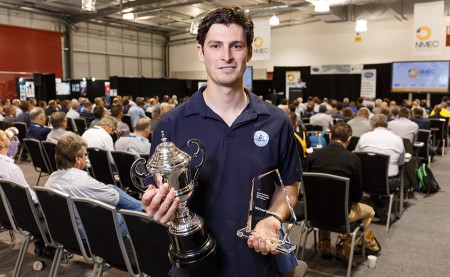 Waikato maintenance engineering apprentice Michael MacKenzie has taken out the prestigious Stuart Tolhurst Memorial Award for 2017. Michael is in his second year of his apprenticeship at Tetra Pak in Hamilton.

The coveted award remembers Stuart Tolhurst, a highly regarded application engineer who was credited with eing an expert in rolling element bearing design and application. Michael received the award at a ceremony last week in Hamilton at the annual National Maintenance Engineering Conference.

Competenz, the national industry training organisation that represents 36 industries, has co-ordinated this award since 2015. Nominations are put forward from Competenz account managers and training advisors. Characteristics the judges were looking for in the apprentices included a good demonstration of initiative and leadership, good work ethic, an enthusiasm to learn and ambitious in their career.

“Michael was identified early as having the leadership potential to progress through the company,” says Tetra Pak NZ Field Service Manager Barry East.

“He is sharp, studious and will often read up on the skills required for a job beforehand. He has great communication skills, is adaptable to change and always has the business’ best interests at heart. We were so confident in Michael’s abilities that we sent him to Wharera for three months to manage the site shut down and he did a fantastic job. Great going for a second year apprentice.”

With his trophy in hand, Michael is keen to promote his trade and recently shared his experiences at the Engineering Careers Association event, designed encourage young people into apprenticeships.