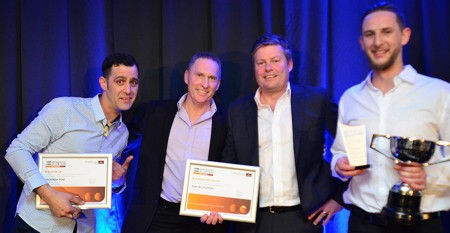 Simon is a fabricator at MJH Engineering in Lower Hutt and finished his apprenticeship in 2016.

Finalists were assessed on a written entry submission, a practical exercise at MIT and face-to-face interviews with the judges.

Simon says he was confident during the practical session as it tested his basic skills, however the interviews were “a bit nerve-wracking”.

The award was presented at the Metals Industry Awards Gala Dinner at Addington Raceway in Christchurch on September 15, which Simon attended along with his managers from MJH Engineering.

It was a night of celebration for the steel construction industry, and the award was presented in front of more than 220 guests.

The runner-up was Bronson Pine from John Jones Steel in Christchurch.

The judges said Simon and Bronson were of the highest calibre and demonstrated excellent attitude and aptitude that should make the industry, their companies and their families proud. It says a lot that they helped each other out during the practical exercise. The judges found it very difficult to choose between the two finalists and congratulated both on their efforts.