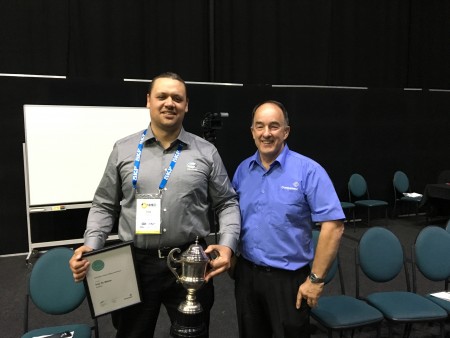 The demands of raising three young children, completing an apprenticeship and working full time have not stopped Inia Te Wiata from achieving success.

The Waikato-based mechanical maintenance engineering apprentice will qualify in early 2020, having amassed 8,000 hours of training under his belt. Inia works for Fonterra's Hautapu factory where he is completing his four-year apprenticeship.

Deciding to embark on an apprenticeship came from Inia’s desire to create a better future for him and his family, one that would give them more choices.

“My wife and I both signed up for training. She’s now a qualified social worker, and shortly I will be a qualified maintenance engineer. While it was often tough during those years, the rewards have made it worth it.”

Prior to starting at Fonterra, Inia worked at a food processing plant. He says he had no idea what maintenance engineering was, but that changed when he saw an advertisement in the paper.

“It’s great that Fonterra is able to help people like me make a fresh start. I wanted to change my career to something that could provide more options. So I applied – I was a lot older than most of the applicants and didn’t have any pre-trade experience. But here I am, about to qualify.”

“The machines are automated and very technical, with everything controlled from a screen. But on the process side of the operation on the factory floor – pumps, valves and belts - manual engineering knowledge and skills are needed. It’s the variety that I enjoy and I love that there’s something different to do every day. I also really enjoy working with the team, many are 50+ so they’re really knowledgeable and are keen to share that with me. It’s great.”

Fonterra’s maintenance team leader at Hautapu, Ray Jackson says Inia has a thirst for knowledge and a willingness to learn.

“From knowing nothing at the start, what he has achieved in the four years he’s been with us is incredible. He’s a very quick learner and has a drive to find a better way of doing things. Instead of being content with fixing a problem or a piece of equipment, he wants to find a way to make it better than it was so the problem doesn’t happen again.”

Finding the balance between family, work and study has been a challenge for Inia, who says he considered giving up “a couple of times”.

“I don’t know how we did it! I worried how we’d get through but we stuck with it and it has worked out. I also went from knowing nothing – I didn’t know the trade even existed! – but by constantly picking everyone’s brains and learning, I’ve found a love for it.”

Inia’s dedication and commitment to his trade has seen him win the national Stuart Tolhurst Memorial Award for 2019. The coveted award remembers Stuart Tolhurst, a highly regarded application engineer who was employed with SKF New Zealand for more than three decades and widely acknowledged as the New Zealand expert in rolling element bearing design and application. Industry Training Organisation Competenz has co-ordinated the award since 2015, which is open to New Zealand maintenance engineering apprentices in their third or fourth year of training.

Inia was nominated by Competenz training advisor Allen Bryce. “It is Inia’s attitude that impresses me most. He’s an all-round excellent guy, hard working and reliable, and the skills of the maintenance trade have become a passion for him.”

“The recognition came as a bit of a shock,” laughs Inia. “Just to be nominated was cool and we celebrated that but to win was amazing. I’m not used to being in the limelight!”

Now he’s about to finish his apprenticeship, Inia says he wants to continue to study and get his Level 5 and boiler ticket.

“Having a qualification has given me a lot of options. I don’t have any debt from my study and I’ve been getting paid while I’ve been learning. And the engineering trades are really interesting – the science of fixing problems. I would definitely recommend this as a career path.”